Go to a movie she said, get yourself out of this funk she said. Better than my plan of smashing possibly valuable antique china against the garage door, and throwing everything into garbage bags and slinking off to go live a quiet hermit like existence and never speaking to anyone ever again, plan. Ever again, except people I like, except for Fezzik, because he’s the best, except my students and coworkers. Okay, never again speaking to people who annoy the bejesus* outta me. 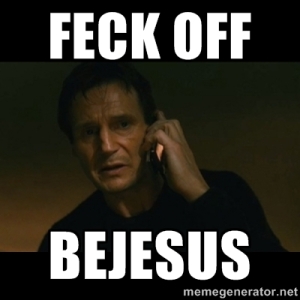 see, I didn’t make it up

*Bejesus, is a lesser known, but fairly important hormone found in most humans in varying amounts depending on varying factors. It is excreted or lost in times of agitation, surprise or stress, as in “you scared the bejesus outta me!” Similar to, but still distinct from ‘crap’, which has an entirely different odour when it is ‘scared outta you’. It has been known to stimulate the ‘Fuck This-FT’ response which is responsible for the ‘Clean all the Shit Syndrome-CSS’, ‘Send Incoherent Emails your Ex Disorder-SIEED’ (except he’s not really your ex, because you have to be a ‘thing’ before you can be an ‘ex-thing’ and he wasn’t into being a ‘thing’, and would only state (under great duress) that your ‘thing’ was slightly more than friends with occasional benefits, odd movie dates, with witty and occasionally racy texting on the side kind of ‘thing’), and the subsequent ‘Sound Like a Fecking Idiot Syndrome-SLFIS’ which has been linked to ‘Eating the Whole Goddamn Box of Cookies’, ‘Hating All of Your Clothes’, and can include side effects such as ‘web searches for plastic surgery’, ‘installing dating apps’, ‘uninstalling dating apps’ , ‘application of detoxifying lime green facial masks’, ‘having existential conversations with the cat’, can also trigger Hamster Wheel thought brain override. Bejesus is not for everyone. Ask your doctor if Bejesus is right for you. If you’re a woman in the United States ask your white male congressman if Bejesus is right for you, then ask your white male conservative Christian religious leader if Bejesus is right for you, then pole your white male relatives to see if Bejesus is right for you, then consider why you need Bejesus in the first place, and why aren’t you happy enough in your subservient societal role, and let go of all this ‘Uppity Woman Bullshit’, and get your ass back in the kitchen and just make the men in your life a goddamn sandwich, like God intended. 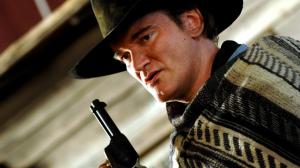 Movie. Great idea. Quentin Tarantino movie, even better. There will be no covert love story, no sweeping music, no heartfelt redemption, just fabulous gut and brain splattering violence, the very darkest humour, and Samuel (Fucking) L. Jackson, who is even awesome without is testicles (oops, spoiler alert).

So you go to a Saturday night movie by yourself because you’re a strong independent woman who makes sandwiches for nobody, and it’s awesome, running into people you know, not having to share your popcorn, drinking whatever you want to drink and sitting wherever you want to. Which turns out to be basically the same amount of popcorn, same drink and the same spot in the theatre, but you don’t even notice this because you are having a fabulous time dammit, and it’s Quentin Tarantino, could you be any more clever? No, I don’t think so. So there you are, in the same seats, eating your popcorn, with your jacket on the seat beside you, because not sharing is fucking awesome, and then an eHarmony add!? e-fucking-Harmony? Can they actually do that? Which triggers the Bejesus cycle and it takes half a bag of popcorn, 10 twizzlers, and 3 violent movie trailers before you get back to your self actualized independent woman who gives zeros fucks about all the adorable couples surrounding her in the movie theatre. 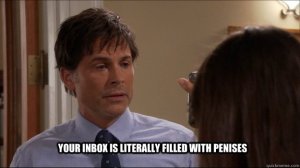 hope is not enough

thoughts of a Canadian living in America today